Use of GIS in Agriculture - P1 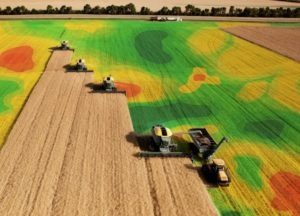 A Geographic Information System (GIS) is a tool that creates visual representations of data and performs spatial analyses in order to make informed decisions. It is a technology that combines hardware, software, and data. The data can represent almost anything imaginable so long as it has a geographic component. The hardware can be anything from a desktop computer or laptop to satellites, drones, and handheld GPS units. There are a few different software packages, but ESRI’s ArcGIS suite is the industry standard. The public, private, and non-profit sectors all employ GIS to do everything from manage public utilities to organize the movement and dispersion of goods and services. GIS is very functional in traditional map making, to plot things like fire hydrants along a road, or to draw boundaries, like the area of different crop fields on a farm. 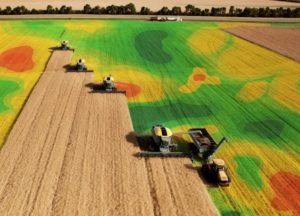 The real power of GIS, though, lies in its ability to analyze multiple data layers or variables.  Simple examples of this within the realm of agriculture would be; a map showing the number of farm injuries by county, or the number of crop acres lost to flood by tax map parcel. The polygons representing different ownership or municipalities can convey the change in values in different ways, the most common being a changing color ramp.
More complex spatial analyses for agriculture might compare variables like soil type, wind direction, rainfall amount, slope, aspect, topography, or elevation to assist with crop management, site suitability, and drainage planning, as well as risk prevention from flood, drought, erosion, and disease. GIS can help a farmer adapt to these different variables, monitor the health of individual crops, estimate yields from a given field, and maximize crop production. There are many sources for GIS data free of charge and also for a fee. Universities, government agencies, and private companies are all repositories of spatial data. The New York State government hosts a GIS clearinghouse with a great variety of datasets, some available to the public and some to clearinghouse members only. Some of these data include addresses, watersheds, aerial photography, municipal boundaries, district boundaries, tax map parcels, and road networks. Another GIS-based resource available for free to the public is the USDA’s CropScape, an interactive web-based mapping application which shows the type, quantity, and location of crops growing across the country. By using land-use and primary food crop statistics, along with data collected by satellites and mobile devices to identify areas in need and underlying causes of food insecurity, GIS is also instrumental in the efforts to end global hunger.

Satellites, drones, and manned aircraft are used for remote sensing, which is the gathering of information about the earth’s surface by scanning it from high altitudes. The Landsat 8, a joint effort of the USGS and NASA, is an observation satellite which orbits the earth every 16 days. It captures 9 bands of the visible light spectrum which can be used to calculate factors like plant disease, nutrient deficiencies, insect infestation, or crop moisture excess and shortage. It also captures thermal infrared radiation (TIR) which is outside the range of human vision. Depending on the surface temperature, the intensity of the wavelengths emitted by different types of vegetation and various manmade and natural landscapes differs. The recorded data is converted to visible digital imagery and can be applied to general objectives like managing water for irrigation consumption or plant disease detection.

It can also be applied to very specific objectives like evaluating the maturity of fruits. The aerial and TIR imagery captured by remote sensing are widely used layers in a GIS, and the data collected by the Landsat 8 is made available to the public for free.  Higher resolution imagery is collected by low altitude aircraft which make flights over longer cycles ranging between 3 and 10 years. The Farm Service Agency, a department of the USDA, conducts a few such programs. One of the greatest benefits of remote sensing is that it is non-invasive and does not negatively impact the area which is being observed.