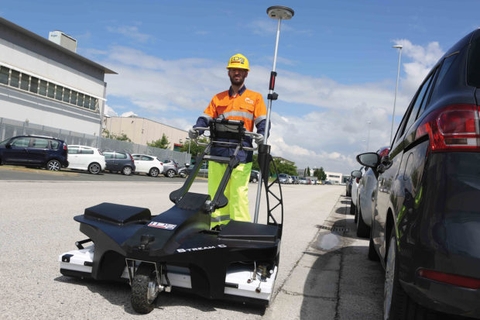 Mapping underground features poses a challenge given limitations such as a lack of ability to use GPS or even tight spaces that make the use of certain equipment, such as theodolites, difficult to use. However, these challenges have been overcome and now even older features that were tunnelled or dug long ago could be better mapped, such as old underground pipelines, that helps improve service and safety. Additionally, mapping underground features could help us better prepare for major disasters such as earthquakes.

Today, in countries such as the United States, any building project requires that contractors and builders have an accurate, usually 3D understanding of subsurface features around construction sites. The infamous Tremont Street Gas explosion in 1897 highlighted the fact that unmapped gas pipes could pose a serious threat to safety if pipes are accidentality struck.

Ground-penetrating Radar
Ground-penetrating radar (GPR) has been around, in some form, since 1910, but in recent years the technology has become far more accurate, often now used to create detailed 3D maps.
Different frequency radar signals enable different levels of given features to bounce back signals that allow an accurate 3D reconstruction of features at multiple levels. This means that underground utilities, including multiple lines running over the same space, could be mapped and reconstructed by capturing the data from the surface.

Electromagnetic Location (EML)
An alternative is to use Electromagnetic Location (EML), which uses electromagnetic signals emitted from a source. The difference between GPR and EML is that GPR is usually a process that depends on the user of the GPR emitting signals that bounce back from an object, while EML a signal could be either emitted from the structure, such as a pipe, or a generator could be applied onto the object that makes the object emit the signal to then be mapped.

Mapping Underground Cavities
Detecting underground cavities is also critical not only for safety, such as in detecting potential sinkholes or large holes developing under construction in urban areas, but also for scientific purposes. Mapping caves or subsurface cavities can help scientists find these features.

Methods such as finite-interval spectral seismic ambient noise, which uses an above ground station to emit signals, can be used to delineate cavities underground based on how the emitted waves travel through and around cavities. Changes in the waves relative to background data help to demonstrate where openings or cavities have developed.

Measured emissions from stations then help put the data together to create a potentially accurate understanding of the underground structure’s outline. The method also can use a limited number of emission points, which helps make it easier to find these areas particularly if mappers are unsure where they are.

Underground Seismic Mapping
Another potential is we are also now beginning to understand how to map underground noise, particularly seismic noises which may signal changes to subsurface structures during earthquakes or as a signal for future earthquakes.

Using orthogonal wavelet coefficients, and their variation based on 229 stations, researchers have shown they could understand how Earth’s underground noise has shifted between various major earthquakes. Additionally, the signals, using multiple reference stations, can be associated with a given place and time, helping to map noise changes and pinpointing to what likely events created given noise changes.

By studying decades of historical data, scientists are better able to determine how subsurface, seismic noise varies in time and place. It has been shown that noise changes could potentially suggest a triggering effect that may help scientists better understand the process in which earthquakes affect underground structures and how they are likely to occur and when.

Other studies have shown that other noise sources are prevalent in addition to earthquakes affecting subsurface features. For instance, in a recent study covering Europe using about 1000 broadband stations in the period between 2011–2019, it was shown that the North Atlantic and eastern Mediterranean have a major influence in the subsurface noise detected across the European content, with the sources of the noise and input varying seasonally based on oceanic wave changes and their intensity.
Mapping underground features, whether it is physical structures or even noise, has greatly improved in recent decades. This is beneficial more than just in satisfying our scientific interest, but it also means we might be better able to create safety systems that prevent small- and large-scale disasters. So much of our planetary processes happen out of sight that mapping subsurface features will be critical for us if we are to understand how these processes affect us. We now have better and improving tools to enable more accurate subsurface mapping.