HOW THE SATTELLITE IMAGERY INDUSTRY IS RE-INVENTING ITSELF 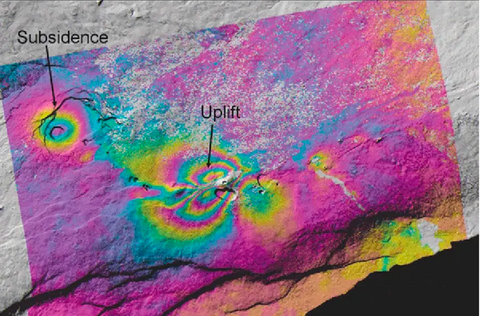 New companies are developing solutions that use satellite imagery for quantifying and illuminating climate related disasters, while the potential of synthetic aperture radar data is waiting to be unlocked, says Joe Morrison.

Joe Morrison is VP of commercial products at Umbria. In his daily work, he advises about different types of satellite data and their use cases. The idea of monitoring versus mapping is a fundamental differentiator between what certain types of data are good and less good for, says Morrison: “high-resolution optical imagery for example has multiple characteristics that make it useful for tracing features that don’t change very often, such as buildings, roads, parks”.
Because optical imagery is captured with big lenses, it results in super high-resolution imagery of a broad area that’s optimized for absolute accuracy, which is a requirement for many professional mapping applications. Finally, optical satellite imagery is easily interpretable by humans as the imagery is taken from space looking straight down to avoid geometric problems when transforming the data from a 3D to a 2D environment.
Monitoring human activity on earth such as cutting down forest or manufacturing cars in a facility is a use case where optical imagery is less optimized. There’s no access available to optical imagery as it’s too expansive to capture the imagery on a regular cadence. Another issue is cloud coverage that make the targets complicated or impossible to monitor from space using optical imagery. Finally, because optical imagery passively collects light bouncing off the earth, it cannot be captured at night resulting in downtime. 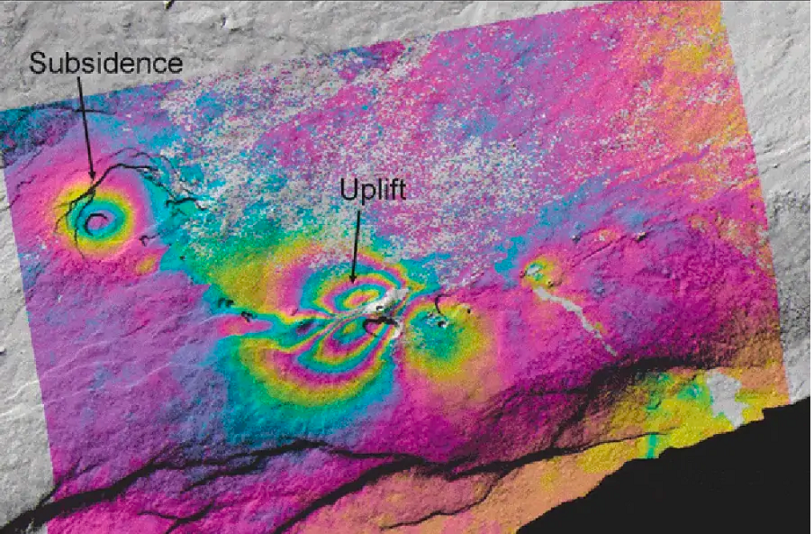 This ALOS PALSAR interferogram shows uplift and subsidence related with a June 2007 earthquake on Kilauea Volcano. Kilauea Volcano, located on the southeast area of the Hawaiian island of Oahu, has been erupting nonstop since 1993. Image: Zhong Lu, USGS.

A solution to these problems is to use Synthetic Aperture Radar (SAR), which is an active sensor which means it can capture imagery any time of day in just about any weather condition. Contrary to optical imagery constellations, radar does not use camera lenses but synthetic aperture.

The challenges and opportunities of SAR
While SAR has been around since the 1950s, it wasn’t until recently that companies started launching commercially focused satellite constellations at a high resolution. “This is a super exciting time for SAR. The big question is while will be able to figure out what to do with new SAR data, because there are not enough people focused on that problem. The industry will need to recruit people to solve problems, which will take some time”.

SAR consists of two components: amplitude data, which is most analogous to a black and white image. The second component is phase, which is the wave pattern of the photons that are reaching the sensor after originating from them and bouncing back on earth. If that wave form gets shorter or lower, the point in the wave form will change and land on a different spot in the save pattern. This will now become available in a commercial context to do things such as infrastructure monitoring, for example looking for sings if infrastructure is structurally weak or where aquifers are draining.
However, there are several problems that need to be resolved before SAR data will become ubiquitous. “Not only is SAR is newer than optical imagery, it’s also harder to work with and less familiar, says Morrison. “For example, it’s not in the wavelengths that humans can see with their eyes, as with optical imagery. It’s not easy to interpret. There’s no standard file format for SAR data, or good open-source tools for working with it. While this means opportunity for the early adopters, the downside is that it will slow down commercial adoption because people don’t know how to work with the data”.

After writing down his opinions about the limited access to satellite imagery in a blog post that was published during the pandemic, he was surprised to see many in the industry shared his opinions and agreed that a change was necessary for the industry to be able to move forward. He says: “I realized that the whole industry is focused on the same goal, as we have come to realize that there is a climate crisis on this planet right now. Satellite imagery has an irreplaceable role to play in quantifying and illuminating where climate risks are in responding to climate related disasters”.

Looking at new tools, applications and businesses in the industry, Morrison noticed that people are thinking about new satellite businesses today totally differently than how satellite imagery businesses have been built historically. “That got me excited again and decide to dedicate my career to his cause. I can’t even imagine all the ways that this data can be applied, which makes this industry so much fun to work in”, he concludes.